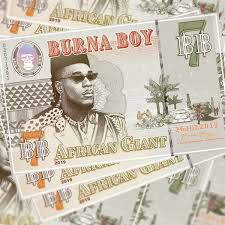 I’ve been a fan of Burna Boy from his earlier days and the days when Afrobeats wasn’t as mainstream as it is today. As a Nigerian myself, I have grown up listening to Afrobeats and Burna Boy in particular. From early, Burna Boy has always had a unique sound and despite his now worldwide success, he has stuck true to it. His debut album L.I.F.E released in 2013 has some of my favourites from him; “Abeg, abeg (Remix)”, “Yawa Dey”, “Tonight”, “Like to Party” and “Smooth Smailing”. Most of these songs propelled Burna into the limelight but nothing has provided him with as much as his song “Yé” released from his 3rd studio album.

I was excited for the release of ‘African Giant’ because I have always enjoyed Burna’s musical projects as a whole. His talent is always displayed in big bodies of work. On first listen admittedly the album did not stick out to me as quickly as his other albums did. However, after taking it in for a few days after and now weeks, I can honestly say this is his best album. For me, for a fourth album from someone who was already great, to top his previous is a big big statement. In this album, you can hear his growth as an artist but also his improvement. His last album could be considered to be a mixture of all sounds but this is 100% an African album. From the beats, instruments and sounds, I felt like I was in Nigeria listening to this.

Another point to add is that this is more than just a music album. The album contains history and facts about Nigeria and Africa.

Whilst there are some American features, never did I forget I was listening to a Burna Boy project. Every song on this album has a different vibe and different feeling associated with it. Everytime you listen, a different song will stick out to you. To be able to do that with an album of 19 songs is somewhat incredible! I will talk about some of my absolute favourites from the album…

A great intro to the album in my opinion. Burna Boy always has stand out lyrics in his songs and this song is no different. The song is an anthem for any African that has a dream for his people. It is the perfect taster for what is to come.

“Because God no go give you more than you can handle”

The title of this song is Pidgin English for “What will a man do”. In the song, Burna explores the idea of a man living in an African economy and the struggles he may face. The song has a very strong African feel to it. The last verse for me is sad as its obvious the man is helpless. Burna sings “Man go fight for money, man go fight for woman, man go fight for business, man go fight for nonsense (wetin man go do)…body don dey tire”. All of the struggling the man has to do is non stop. A sad reality for some people in African countries.

This is one of my favourite songs on the album. Similarly to his previous album, Burna Boy uses an English feature to help him on the song. Personally I’m not usually a fan of Jorja’s voice or music but the partnership with Burna in this song is perfect. The title of the song is a term used to describe wanting to be around someone. Jorja’s voice in her verse is sensational and plays on the theme of the song where they both sing “Why did I drink this Hennessy? as her voice sounds as it would, of someone who is a bit faded. I loved Jorja’s harmonies in Burna Boy’s verses, the blending of their voices without Burna Boy having to compromise his sound shows us how talented yet again he is. I have had this song on repeat since first hearing it.

“Why did I drink this Hennessy?”

This is already one of the standout songs of the album and it’s not surprising. The song is performed so well by Burna Boy everytime he does a show. Zlatan’s verse in this is very underrated. His tongue twisting lyrics spoken in Yoruba with a fast flow are a joy to listen to. The dance moves associated with this song are great too.

“We making money rush rush like indomie indomieee” and all of Zlatan’s verse!

Have a listen to the song and watch the video;

This song is definitely one of my ultimate favourites from the album. I love the flow and switch up Burna has in this song. His flow changes as he sings “Girl I’ve been scheming, plotting, planning…fuck a plan A, move to plan B” and switches up again after that verse. We hear singing Burna and rapping Burna in this song and it works well.

This is the first song on the album featuring an American artist. Jeremih however adapts his voice to Serani and Burna meaning the whole sound isn’t compromised. I like this song because of that reason. The only issue I have with it is that sometimes the song can sound a bit whiny. Burna Boy’s voice does break up the high singing but sometimes I feel Serani and Jeremih were too much together on the song. Have a listen below;

Burna takes us on a history lesson on the colonialism of Nigeria in the first few seconds. In the song Burna Boy explains how the politicians in Nigeria are stealing from the country since Nigeria’s independence in 29160 and not doing anything to help like they should. Ghanian artist M.anifest’s verse is also similar as he talks about the fact he travels out of his country sometimes; “Sometimes I for dey move away, maybe a month, same shit, Ghana – Naija, man tire”. He is saying that even in his country he has the same issues. Similarly to “Wetin Man Go Do”, Burna is highlighting the worrying parts and unfortunate realties faced in Nigeria and many African countries.

I like the softness of this song, Burna slows down the pace with this one and provides the album with a romantic side. He sings in the third verse “24/7 you been sitting on my mind, Baby you wey I think about like all day” emphasising the fact she is all he is thinking about”. The song gives the impression that Burna Boy wants to keep this relationship on the down low though. Further on in the verse he sings; “Loving the vibe that’s between me and you, baby don go telling no body”. He makes the affair sound as if it is sacred when really he just doesn’t want to get caught.

This song reminds me of J Hus’ song “Spirit” with the idea that Burna is reminiscing on his childhood and the idea that his mental strength can never be taken away. Burna reminisces; “I remember when I used to hustle in the flats and the neighbors then had no love for me” probably exploring how he has risen from struggling conditions to the star he is now. The song is very positive as he basically implies that people can do many things to bring him down, but they can never take his “destiny”. This has a similar feel in J Hus’ spirit when he sings “Even when we never had a penny, yeah we always had spirit”. In the second verse of the song you can hear Burna Boy’s British accent a bit more reminding us of where he grew up but also making us realise how personal this track is. I feel Burna has done well on this album to show us where and what he has come from but also proving that this has shaped who he is today. They can take everything I have, they can take my life, they can’t touch my destiny

This was a song I really took in more with later listens. Future is usually really good on features and he did not disappoint on this track. For me it was enjoyable to hear the back and forth between both artists.