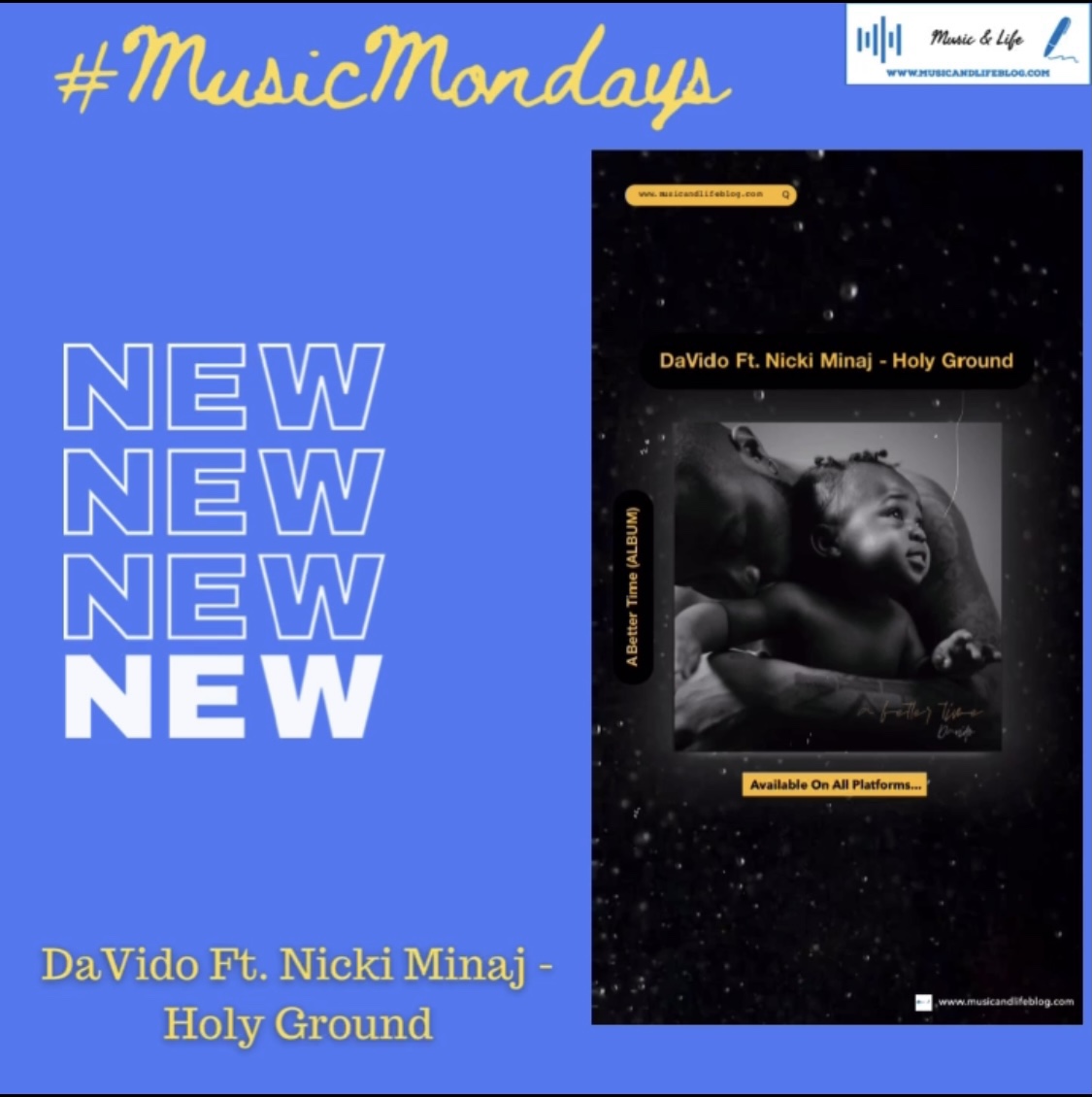 Happy Monday everyone!! Hope you all had a great weekend! Good news is that I should be coming out with a few more posts this week! Even better news is that I have something in the pipeline that I will be announcing soon!

For now! Today’s #MusicMonday pick is a song that I’ve been playing non stop!! DaVido dropped his latest album on Friday called “A Better Time“. As soon as I heard this track, I fell in love with it! This is one of my favourite Nicki Minaj features in a long time. One thing I do love about DaVido is that despite his many American collab, he never compromises his sound. If anything, the featured artists always somehow tune in to his sound more. I liked the singing Nicki in this track as well as the usual rapping. Both artists worked very well together, I would be down for hearing more music from the both of them.

In terms of lyrics though, I wouldn’t say this song would win content of the year. DaVido’s lyrics are hilarious but I guess with this song it’s more the feeling of the song you fall in love with!

Have a listen below!

Nigeria to the world!!! (Word to Nicki)

Hey everyone! Finally the end of the week which means new music has arrived! I’ve compiled a list of 5 songs recently released that I am loving! Have a listen below;

Lil Wayne has been on point with his features recently! This song, with West Coast vibes, is taken from 2 Chainz’ new album ‘Rap or Go to the League’ and is produced by DJ Mustard (so you know the beat is gonna be sick!). In the song the men compare themselves to a “2 Dollar Bill” which happens to be one of the rarest dollar bills in America. For me, Lil Wayne’s feature was the best on this song. There is a part in Wayne’s verse; ” I’m rare, like a commercial with Future and Cher, like a cop that’s fair, like a triple-double dare”, where the flow switches and you really see Lil Wayne’s talent. I like how all artists had great examples of things that were rare, some comical while some sensitive. Have a listen below:

UK rapper Ms Banks has been on a roll recently, having recently performed at the Brit Awards with Little Mix and now releasing a new banger. The song which uses a sample from Nigerian superstar Wizkid’s hit song “Don’t Dull” (2010) is a summer hit. The song which features Nigerian Afrobeat singer Kida Kudz is the first single released from her upcoming project ‘Coldest Winter Ever Pt.2’. I like the confidence Ms Banks exhibits in this song, I think this is a song that many women will be singing. The video is bright and bubbly too and gives me Nicki Minaj ‘Barbie Dreams’ vibes. I’m ready for this new and improved Ms Banks, it seems like she is ready to take over the female UK rap scene! Have a listen and watch below.

I previously uploaded the video to this on my Instagram page (www.instagram.com/musicandlifeblog). I love this song and the visuals! Wretch 32 was giving me Bob Marley vibes with his new look and sound and the two of them played off each-other so well with their playful lyrics. The chorus is possibly one of the most catchy hooks I’ve heard this year and I’m sure you will be singing “I feel a way” randomly throughout the day like I have been! The video reflects the fun vibe the song gives with the men having fun in the snow. I think this song will be played everywhere in the summer. Have a listen and watch the video below

Looking at this collaboration on paper, it’s hard to guess what this would sound like but you will be pleasantly surprised as their voices complimented each other throughout. The song also taken from 2 Chainz new album ‘Rap or Go to the League’ uses a sample from Amerie’s 2002 song “Why Don’t We Fall In Love”. Ariana sings the chorus “Top down on the Dawn like I’m used to it (Yeah), prayin’ you make it home like I’m used to it” with her unique soft but sensual voice. The song is produced by Hitmaka (or Yung Berg as I think of him as) and the beat compliments the fusion of both aritists. The song is one of those songs you can vibe to and feel good about. Check out below;

Here is the Amerie song that it was influenced by:

The Landlord Giggs arrives again with his new album ‘Big Bad’ which was released last week Friday. This is my favourite song from the track which features Wretch 32. Wretch has a memorable verse on this song and his witty wordplay does not go unnoticed. My favourite lines; ”
I got Jaden in my will, uncle, how you feel?, Call me Fresh Prince, I bring Bel-Air up to your grill”…who does metaphors as good as Wretch?! With all these features that Wretch has been killing recently, I really hope this is a sign for us to look forward to a new Wretch project hopefully coming soon. Check out the song below:

OK so there’s been a few new releases the past week! I am going to put my 3 favourites below.

OK so this version (of Drake’s hit “In My Feelings” featuring the City Girls) contains the full version of the ladies’ verses. I really like these girls and I’m so glad they are finally getting the recognition they deserved. It’s such a shame that one of the members JT is I’m jail but it’s nice to see that Reesha is still keeping it going. Im sure these girls are going to go far.

OK OK! So Nicki Minaj finally released her highly anticipated album “Queen”. This song in particular got the world talking. The song name drops a number of male rappers in a roast kind of style. For me what is more exciting is that the song pays homage to Biggie’s song “Just Playing (Dreams)”. As a big Biggie fan I could instantly hear the similarly in the flow delivered by Nicki and the one by Biggie. In addition we are used to hearing songs from male rappers dissing females or female celebs and it is refreshing to hear a female rapper call out men without sugar coating. The song shows why Nicki is one of the best female rappers about as her unique punchlines and flow stand out throughout the song.

Have a listen to Nicki’s song and the original by Biggie below;

“Sun is down, freezin’ cold, that’s how we already know, winter’s here”. As soon as you hear Drake you know the song is about to be good! This is one of the tracks from Travis Scott’s new album and one of my favourites. The switch in flow after the 3 minute mark is incredible, you could think it was two songs in one!

Have a listen below;

Say what you want about Young Thug but he knows how to make hits. His song ‘Anybody’ featuring Nicki Minaj is definitely a match made in heaven. Thug actually sings very fluently and clear on this song and the addition of Nicki’s vocals blend so well.

The production of the song is also something that stands out. Nicki has stand out word plays as usual on features;

“You gotta picture me rollin’, packin’ a semi (wait) colon” & “Why don’t you act like a Hoffman, and go get to dustin’?”