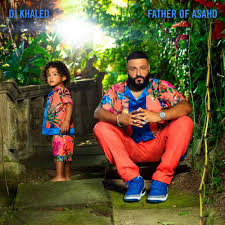 On May 17th, DJ Khaled released his highly anticipated 11th studio album ‘Father of Asahd‘.  As expected, the album features some of the best rappers and singers out at the moment. I also want to add that DJ Khaled incorporates some of the best musical samples in this album and manages to add his own spin to some of them.

Here are my views on some of the songs on the album that have resonated with me;

This is the intro track from the song featuring the recently released Buju Banton. I like the reggae vibe that Khaled has created with this song. My favourite verses of the song are from 070 Shake. Admittedly, I had never heard her before this song but her voice suited the song perfectly especially the tone change of her last “blessing” on her verses. I will be checking out more of her music. DJ Khaled has always incorporated Caribbean influence into his music and I love that he appreciates different cultures. Some of the greats always pay homage to different genres.

I was looking forward to this song due to the fact I feel recently Cardi has been on excellent form on her features. In this song Cardi oozes confidence as she argues she is here to stay from the beginning; “They say my time is almost up, tell them bitches, “Wish, wish”. She uses a lot of metaphors in this song and she reminds me of the old Cardi. The old Cardi that used to release freestyles. “Whatever you do sis, keep it cute sis” is a line that I’ve definitely been singing over.

This is one of my favourite songs on the album! The song reminds me of the impact Chris Brown’s song “Loyal” had. It’s glad to hear Lil Wayne back on a record as he has been missed. He has a line where he says “The brighter the rainbow, the badder the weather” that had be thinking how real that statement was. Lil Wayne is the best at those kind of metaphors. Chris Brown’s voice makes the song easy on the ear and I am convinced this will be one of the songs of the summer. The video features one of the funniest moments where Khaled catches a piece of meat with his mouth. Music aside, I love how much fun Khaled shows himself to have when it comes to music. The summer vibes in the video are also very contagious! Another great video from Khaled, even the extended version haha!

Not much to say on this song apart from the fact the Outkast “Ms Jackson” sample on this song is perfect!!! This is a more slowed down version and Sza does the beat justice.

Hands down my favourite song on the album and at the moment in general! On the track, all artists complement each other. The usual sensual voice from Jeremih as he wonders why the woman is staying with someone that doesn’t deserve her. My favourite lines from him; “I just want to see you happy, I just want to see you laughing, I just want to see you smiling “. The usual rugged flashy rapping style from Meek; “Because I caught you slipping, left you no choice, you ever cry again, it’s gon’ be in a Rolls Royce“. To make this song even better, J Balvin inserts his beautiful Spanish language to it. I wish I could understand Spanish because his part is my favourite part of the song.  DJ Khaled did so well with the production of this song too. The song could have done without Lil Baby’s addition but otherwise, such a tune, definitely a song ladies will love

I’ve previously talked about this song and the accompanying video; https://musicandlifeblog.com/2019/05/17/higher-by-dj-khaled-john-legend-the-late-great-nipsey-hussle-thoughts/

However, I just want to add that is the first song in a while that anytime I hear, I get chills from. Also, to add, John Legend really did his thing on this song because his voice is incredible. Rest in Peace Nipsey Hussle.

The Marathon is continuing.

I knew this could potentially be a big record. As a huge fan of Rick Ross, I know when it comes to features he always delivers. His memorable lyrics being “Much richer then I last was (Woo), you could tell by the laugh, cuz (Hahaha) .

I know I complimented DJ Khaled’s use of samples originally but the more I listen to some of these songs, this one in particular I realise it could be considered an easy way out. This song was not redone enough to make it something other than a Jodeci remix. I like Lil Wayne on the  song but if I’m honest, I don’t’ think there was any need to re do the original.

Overall, those are the songs that had the most impact for me. Like I mentioned earlier, the use of samples for me had positive and negative connotations. I feel that some of the songs could have done better with an original production and I feel that the use of samples was an easier way out. I’m all for people paying homage to the greats but I feel it should be a hint of homage and not a whole dose. I’m positive this album will do well numbers wise and pretty much all the hits are summer singles so it’s nice to have some positivity within music. However, whether I will be still listening to this album as a whole in a few months time? Time will tell…