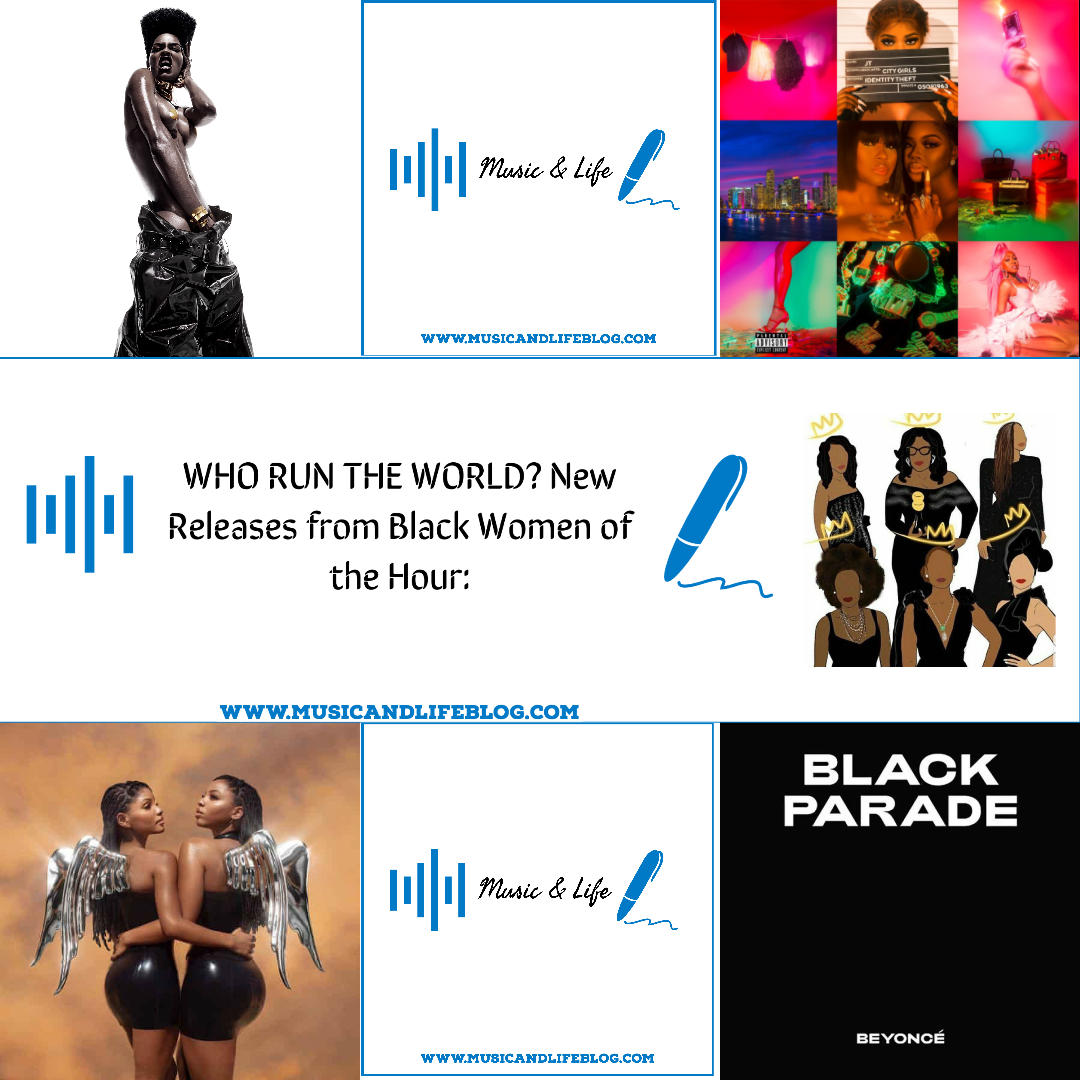 Hello all, hope you are all well! It’s been a very traumatic month for most people, me included but I hope you are all taking care of yourself. Before we go even further, a friendly reminder that BLACK LIVES MATTER…ALWAYS HAVE…ALWAYS WILL.

This post is dedicated to all the incredible women out there doing their thing and working twice as hard to be considered on the same level as men. The post is specifically highlighting the talent of Black women. I truly believe black women have the hardest ladder to climb sometimes, in music, sports, the corporate world. With sexism and racism against us, sometimes I feel we are always underestimated and overlooked. Today’s post is about all the new music that has come out recently from some incredible black women. There’s always a misconception that female artists have to act or dress certain way to be noticed. Each women in this post represent different aspects of womanhood in their own unique ways. Hopefully the different women in this post prove that you can be anything you want to as long as you are unapologetically yourself.

Have a read and listen below to some female power! (HAVE A LOOK OUT FOR THE MOOD/THEMES IN EACH ENTRY DEMONSTRATING THE VERSATILITY OF FEMALE ARTISTS).

Queen B is back with another song and this one is an ode to all things black. The song was released on the same day as the Juneteenth celebrations. A day that celebrates the end of slavery in the United States. In addition, she also released the song with a very important message; “Being Black is your activism. Black excellence is a form of protest. Black joy is your right“. Words to remember. I liked how she emphasised her views in the second verse with; “Yeah, yeah, I’m for us, all black All chrome, black-owned“. On Beyonce’s website following the release she listed many black owned businesses celebrating black excellence reiterating the point in her verse. Another stand out part for me in this song is in the second verse when B sings; “Rubber bullets bouncin’ off me…Made a picket sign off your picket fence“; for me the metaphors are a representation of despite all that is thrown at her and black people, we will never stop fighting for our rights. This is not the first time and I’m sure not the last that B has spoken about injustice and racism and activism. I am however happy that the song is quite positive and motivational for the black community. Beyoncé’s harmonies in this song also make it even more soothing on the ear. Have a listen below;

City Girls are back in full form!!!! The duo had to unfortunately release the album earlier than scheduled due to a leak a few days earlier. However, as one of the millions of fans of this duo, it was great news for us! For me, City Girls represent women in an unapologetic form, I feel they say things that many of us women think but would never say. I believe every woman has an inner city girl within them! They’re fun and exactly what we need at a time like this! Listening to the album had me smiling throughout, I found myself living vicariously through the music describing their carefree and fun lifestyle. In comparison to their first two albums’ “PERIOD” & “Girl Code”, you can hear the maturity in this album, Yung Miami definitely takes more of the lead on this album too which I assume could be due to JT’s time away. I would definitely warn that this album is very Rated R! Here are some of my favourite tracks;

I’m a fan of Teyana’s music. I’ve always felt she wasn’t given the respect she deserved. However I’m noticing that recently she has been respected and praised a lot more which is great to see. Her previous album was released 2 years ago and I enjoyed that project. This new album is even better in my opinion. There is so much depth on this album, we really feel all the emotions she feels on this journey. Her features on this album are some of the best I’ve seen. Nearly all of them work so well and compliment one another perfectly. Here are some of the songs that have stood out for me:

I thoroughly enjoyed listening to this album and it will be on rotation for a while. The album is filled with so many gems! Honourable mentions to ‘Concrete‘, ‘Friends‘, ‘How You Want It‘ Ft. King Combs, ‘Made It‘ and ‘We Got Love‘ featuring the legend that is Lauryn Hill!!!

R&B Sister duo Chloe and Halle are back, this time with their second studio album. To be honest, I’ve never listened to a whole project of theirs before this album. I listened to this one and I really enjoyed it. It seems like the sisters have certainly matured in their music and content. This album for me is like a rebirth of Chloe and Halle, a new age, a grown and unapologetic version of them. I think my opinion on them has changed slightly and it’s nice to see their growth in the music business. One thing I will say is every single song on this album was produced so well, every beat is perfect for the song. Here are some of my favourite tracks from the album:

Some other singles from some other Melanin Queens to check out:

If you haven’t already…check out my Summer playlist below and feel free to follow and enjoy!! Have a nice weekend everyone!