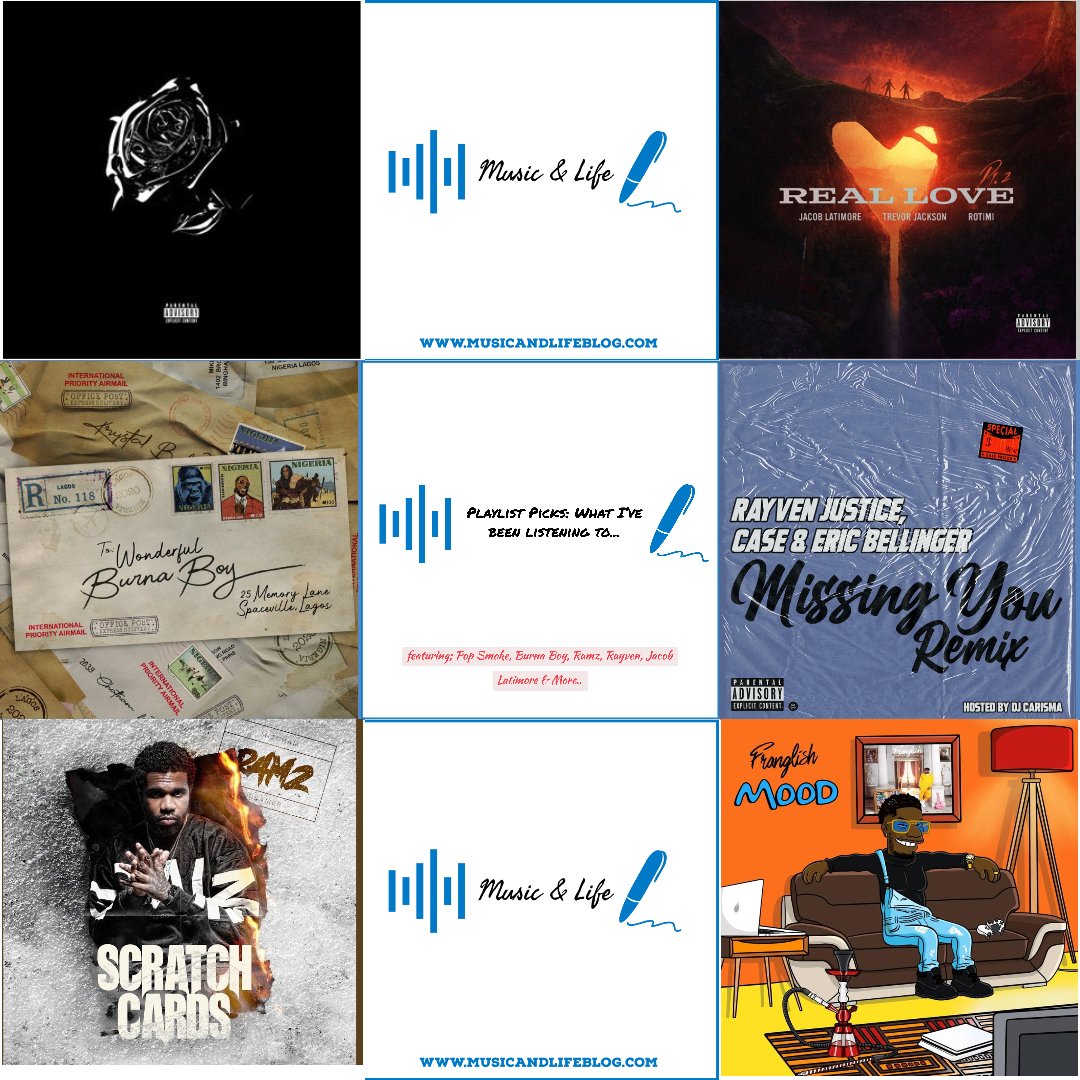 Hello Everyone! I hope you’re all doing well?! Today’s post is on all the new music I’ve been having on repeat for the past week! It’s a strange coincidence that all these releases are from men! That was not the aim haha!

I’m trying to provide you all with more content from now on for you all to enjoy! Please feel free to contact me if there’s some things you want to see more of!

My Top Playlist Picks are:

There was no way I wasn’t going to mention the man of the hour. The late Pop Smoke’s posthumous album ‘Shoot For The Stars Aim For The Moon’ was released on July the 3rd. The album boosts features from Roddy Ricch, Quavo, Future, King Combs, 50 Cent and many more. If I’m completely honest, I wasn’t a huge Pop Smoke fan while he was alive however I always appreciated how talented he was. He made the drill sound a mainstream success in the US and it was clear he was only just beginning his journey. I recently read a really great review from ‘Shahna Says’ of this album release that summed up most of the songs. Have a read here:

Having listened to this album however, it was clear that Pop Smoke was a lot more versatile that most people including myself expected. A few of the songs on the album stood out for me.

Oluwa Burna does. not. miss!!!! This song is such a vibe honestly. Burna said that the song is about the impact his music has on the world and this song is a perfect example of that. Regardless of whether you can understand some of his Yoruba dialect, you will, using his words “feel it in your soul“. The song has a stripped back feel to it and has a lot of emphasis on the instruments. For me this is reflective of Nigerian music in general. The song makes me happy and feels like I’m back home. Have a listen below:

I recently stumbled onto this song and I’ve had it on repeat ever since. This is my first time hearing from any of these artists but I’m impressed. I like the fusion of the melodic chorus from ShoSho combined with the raw rap on the verses from Just Rome. The last verse is my favourite as I love when artists have back to backs within their songs. For me, this makes me feel like both artists are in touch with one another. Have a listen below:

I don’t know what spirit has entered Ramz but I’m grateful for it. He has completely taken a new route in music and it suits him. Coming off the release of his previous single ‘Brixton to Oxford Circus‘ he releases this new banger. Drill really suits his rapping style as he is able to keep the pace and keep his clarity which is a rare talent. In the song Ramz reflects on his upbringing but also his success now. I hope this new sound continues with Ramz and I feel there’s much more talent for him to show. Have a listen below:

With so many wonderful females taking over R&B at the moment it’s nice to hear men doing their thing too. This remix features 3 talented men in their own rights and the video is just as creative being shot during quarantine. I wasn’t even aware Trevor Jackson could sing as I knew him as an actor but was pleasantly surprised. Trevor and Jacob’s harmonising was my favourite part of the song. Have a listen below:

More men doing it for R&B in this song. I like the original song from Rayven which was released earlier in the year but this remix is even better. Any song that features an R&B legend like Case is always going to catch my attention I like how even though Case is old school R&B and Rayven & Eric are new school, they all blend well together.

I have not heard one bad single from Russ before. This song continues with that tradition. Russ is so good at releasing stand alone singles that genuinely are good songs and not just throw away singles. This song touches on Russ’ love interest giving up despite Russ’ reluctancy to do the same. Have a listen below:

French rapper Franglish treats us to a nice anthem from his 2020 mixtape “MOOD” featuring quarantine king Tory. I hadn’t heard of Franglish before but after this song I will be checking out his other songs. Tory Lanez is perfect on this song. The tone of his voice is made for this kind of music. Have a listen below: