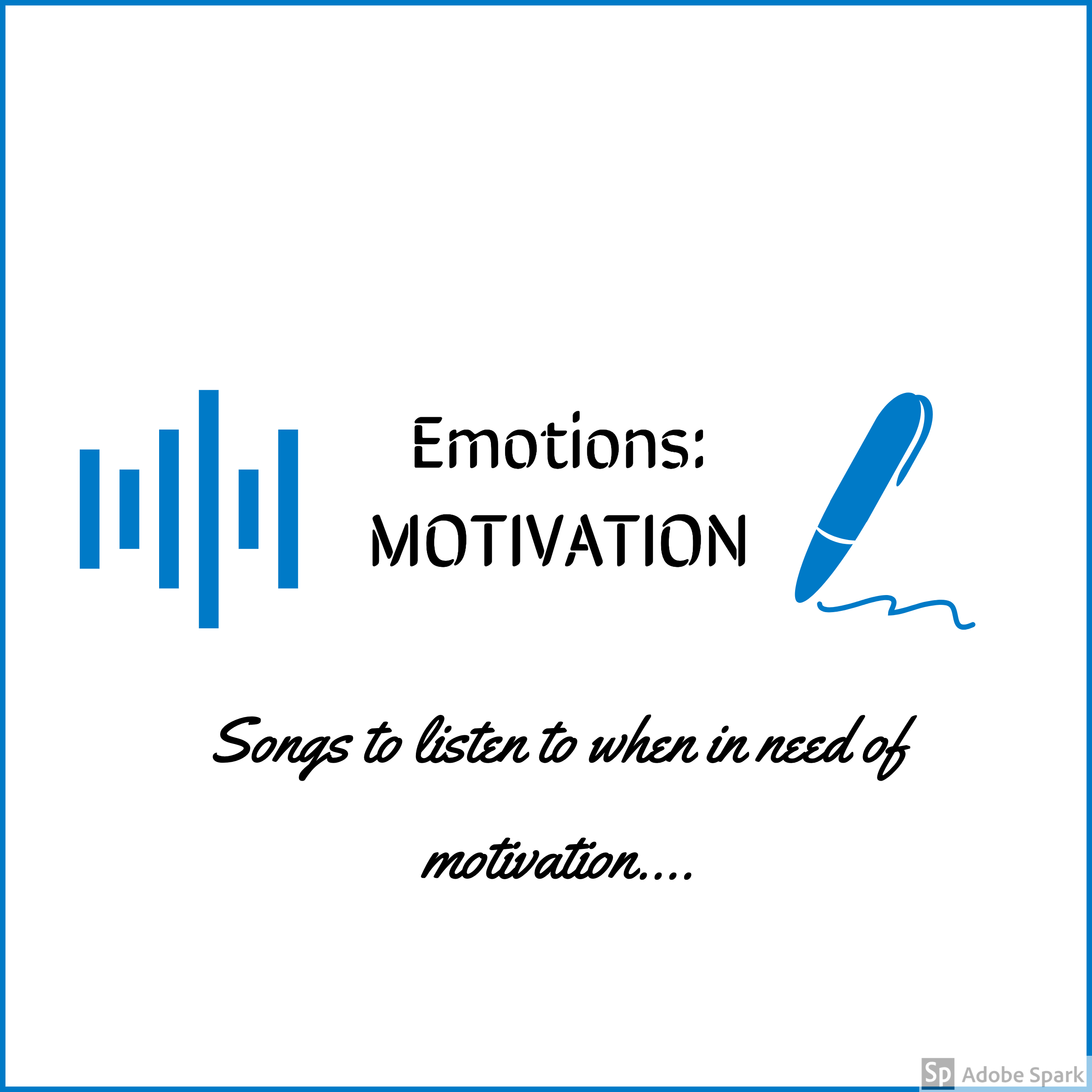 Hey everyone, just a reminder of how amazing music is. I’ve previously spoken about how music is considered therapy to many due to the fact that there is pretty much a song for every situation in life. I’ve decided to do a series of posts dedicated to specific feelings and provide you with a list of songs to help you or support you through that time.

There are times we all feel we are maybe not doing enough or feel like giving up in some situations. Today’s post is dedicated to songs to listen to when you are in need of motivation or a pick me up or just for something to keep you inspired. This is just part 1 as there are so many songs I could have mentioned so for now I’ve given you 10. Have a read below…

The first song that comes to my head when thinking of songs to provide me with confidence is this. The song is probably most known for being in the ‘Honey’ soundtrack. I used to listen to the song on the way to school whenever I had exams to give me the confidence and belief I needed. The lyrics are very motivating;

The song encourages you to believe that you can achieve your dreams and focus on the possibilities rather than the negatives tearing you down. My favourite lines have to be;

This song should 100% make you feel some kind of motivation and self belief.

UK rapper Bashy is possibly loved by so many men due to the impact of this song. In the intro Bashy says ; “This is out to all the black boys growing up, yeah. There’s bare positive black boys around you making movements…making movements toward success“. This song is an ode specifically to Black Boys all around. In a world where they are the minority and sometimes persecuted due to their colour, this song lets them know they are not alone. The song touches on the successful Black Men in media and in life that are doing and where doing well. All those men could be considered role models to young black boys listening. This song is still relevant today in a society where Black boys are killing each-other in every part of the world, some black boys may be feeling de motivated but they must remember “Ooh child, things are gonna get easier…Ooh child things will get brighter”

Religious music is always considered inspirational as it puts things into perspective while putting you at ease. This particular song is also from a movie called ‘The Fighting Temptations’ but the message should not be missed.

There are times when you wake up stressed or de motivated, it happens to the best of us. It’s good to remember that regardless of what religion you are part of, there is a greater spirit out there that believes in you unconditionally. Beyonce sings “Stand for him or fall for anything”, so those who believe in God…I urge you to always pray to him not only for thanks but also when you are in doubt. You have to believe he will always have the answers because he does. The Lord still and will ALWAYS love you.

I don’t know anyone that knows Biggie that doesn’t know this song. This could be considered one of his most memorable songs of all time. Beyond the catchy chorus, the lyrics behind are quite inspirational. The intro of the song Biggie states

Yeah, this album is dedicated
To all the teachers that told me I’d never amount to nothin’
To all the people that lived above the buildings that I was hustlin’ in front of
Called the police on me when I was just tryin’ to make some money to feed my daughter (it’s all good)

Biggie explores the idea that many people did not believe in him but now he has shown them that he has made it. Throughout the song he raps about the difference between his previous life before he became succesful and now that he has. The song is a good reminder to anyone that you may not be the only person that feels like the world is against you. If anything, that should be used as motivation to prove everyone wrong. Throughout the song we can hear Total singing;

^^^^If anything that chorus should be resonating with you whenever you whenever you start to doubt yourself. The hook sounds like your conscience talking to you telling you you’ve got this!!

This is a more modern motivational song. This song is more of a song that when you listen to, you feel on top of the world and that you can do anything. Possibly when you’ve overcome your depression or doubts, this is the song for you. It’s all about winning in life. I just want to add that a win is relative, it could be something small from motivating yourself to get up if you’ve been feeling depressed or it could be something big like the fact you’ve saved up for your dream car. Celebrate every achievement in your life whether big or small. A win is a win and remember ALL WE DO IS WIN!!!.

From the beginning of the song; “Hey, hey, what you waitin’ for?
Do it, do it, do it—what you waitin’ for?“, you already know what T.I is going to say. This song may make you realise to just go for whatever you are stalling on! He even raps; “Don’t listen to them suckers when they say you too irrational” meaning ignore the haters and doubters. So whateve you’re delaying doing due to fear or doubt or overthinking? DO IT!

Another spiritual song here. I’ve previously mentioned what this song does to me but I could argue it can be looked at as an inspirational and motivational song. The song reiterates the belief that we will always rise above any obstacles that may come in our way. Heres a link to my article on the song in more depth; https://musicandlifeblog.com/2019/05/17/higher-by-dj-khaled-john-legend-the-late-great-nipsey-hussle-thoughts/

This could be considered to be one of the most popular intros to an album of this generation. The song starts off slow when Meek says “I used to pray for times like this” as he talks about his past. The song then eventually builds up to Meek describing his success. The energy you get from this song is enough to get you out of your feet and ready to face the world!

After Nipsey’s death I feel this song was one of the most common songs played around memorials for Nip. In this song, like his others, Nipsey spreads wisdom about the importance of self ownership. YG raps about the advice Nipsey gave him in the song “Fuck the middle man” meaning cut out all the extras and do thing yourself. The beat of the song is also very upbeat and I genuinely believe this is a song that will be played for many more years to come. Rest in peace Nipsey. All Money In!

This song is probably motivational for many women. I would say this is the perfect song to play when you are at work and feel possibly conscious of the fact that maybe you are being treated badly due to the fact there are few women. I would also say this song is perfect for mothers that need motivation to know how amazing they are. Women are amazing and conquer so much on a daily basis. Sometimes songs like this are great for reminding us our worth.

2 thoughts on “‘Songs to listen to’ when you’re in need of…Motivation. (Volume 1)”