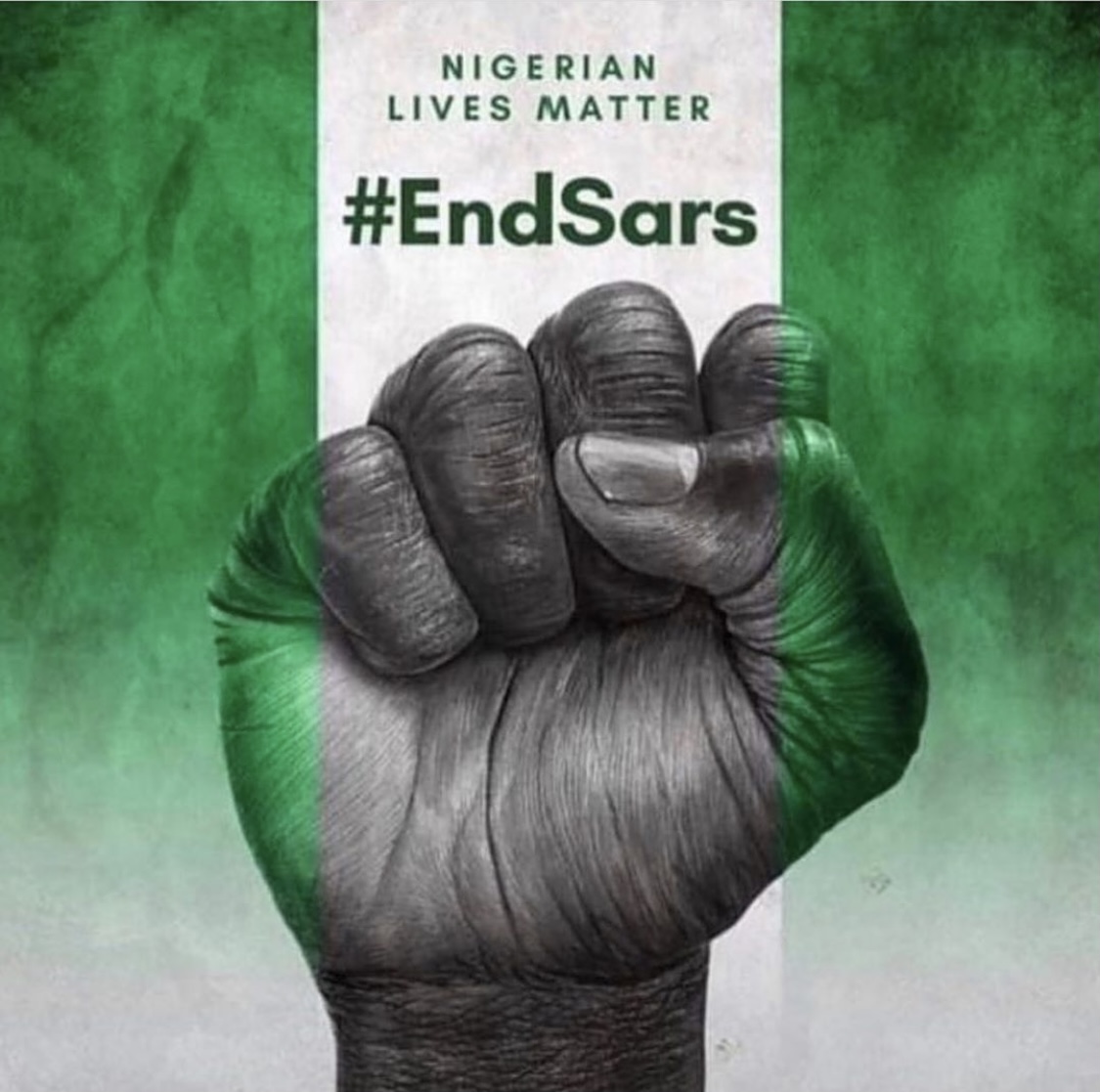 It’s been a terrible time in Nigeria the past few weeks and as a Nigerian myself, living in London, I feel it’s hard for me to feel useful all the way from here. For those that do not know or are unaware of what is happening, there is currently a movement started by youths in Nigeria to ‘END SARS‘.

SARS stands for ‘Special Anti Robbery Squad‘. The squad, a branch of the Nigerian police force, was initially set up to combat armed robbers and thieves in Nigeria. However, many of the SARS team were found to be abusing their power by illegal searching, illegal arrests, sexual harassment of women and even physical abuse of some young men. At the beginning of the month, videos of SARS killing young men and stealing their items of them became more and more prominent highlighting the abuse happening. The ‘END SARS’ movement has been going on for many years but this month gained further momentum, with protests taking place all around the world including places outside of Nigeria such as the UK and America.

Unfortunately, the protests in Nigeria took a turn for the worse on November the 20th 2020. During a peaceful protest on Lekki Toll Bridge in Lagos, members of the Nigerian army opened fire at peaceful protestors killing many and injuring many too. After the massacre, The Nigerian government were not able to confirm the exact numbers of those that were killed as they claimed nobody was killed or injured. If it wasn’t for social media and people sharing videos of what was happening, we would be led to believe that nobody died. Over the weekend the Nigerian government finally confirmed that around “69” people have been killed overall during the protests. (https://www.bbc.co.uk/news/world-africa-54666368). To add insult to injury, the Nigerian government have claimed they are not sure who gave the orders for the shootings on Lekki Toll Bridge to take place. This lack of accountability from the Nigerian government and those who are SUPPOSED to be in charge is part of the reason Nigerian people are protesting and fighting for their human rights. The Nigerian government have constantly shown that they are only in this for themselves and do not have the best interests of the nation at heart.

There is a bible passage that I believe sums up Nigeria at this current state;

Unfortunately the majority of leaders in Nigeria are rotten. Nigeria has the potential to be one of the most thriving countries in the world but the greed of some of its leaders and those in government is what is holding it back.

In 2014 I wrote a blog post about the kidnapped girls in Nigeria. At the time, it felt like Nigeria was in a bad place and I didn’t know how it could get better. In the article, I mentioned that the only way Nigeria could move forward and start to heal as if the government started focusing on the needs of the people and focussed less on their money. It seems this did not happen and alas we are an even worse situation now. (Please read my previous post from 2014 below.)

2020 has really been a year to remember for all the wrong reasons. I am devastated that young people in Nigeria are being killed in vain for a country that does not value their worth. The great late Fela Kuti was one of many people who always spoke out about the injustice in Nigeria. The current Nigerian President Muhammadu Buhari was actually one of the people that put Fela put in prison! It was also exposed that the judge was bribed to convict Fela and give him a jail sentence despite the fact the charges did not apply to him.

After his release from prison, Fela Kuti released a song called “Beasts of No Nation” in 1989which touches on the injustice of the world as a whole. One of the things that stood out to me was that he referred to prison as the “Inside World” and the outside was actually the “Craze World”. For him, all the murders, rape and injustice happening in the world was more dangerous that him being in a prison. The fact that this statement is still relevant to some places in Nigeria today is heartbreaking. For me, the lines that stood out for me on the song were:

If you have time, please do check out some of Fela’s music, he speaks so much truth and so much of what he talked about is relevant today.

Being BLACK this year has been extremely traumatising. From the beginning of the year seeing videos of black people being killed in America by racist police. In addition, the news that Covid-19 research showing that Black and ethnic minorities were most at risk of complications. Now END SARS and being bombarded with horrific images and videos of young people, many of them younger than me being murdered in broad daylight in the country that is supposed to love and cherish them. All of this uproar for simply fighting for their rights. I’ve personally had to take some time out from social media many times this year because the constant negative and depressing news is not good for anyones mental health. I encourage anyone else that is feeling overwhelmed or traumatised from the news to sign out and take time out for yourself.

Remember music is a great way to tune out too!

I don’t have the answers on how any of this trauma can be fixed but one thing I do know is that the new generation have to continue the fight. No matter how tiring it is, we have to keep going to keep fighting for a better world. The deaths of those that have fought with us will not be in vain.

Here are some great links to explain the ENDSARS movement in more detail:

See you all soon!