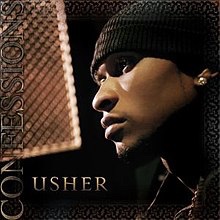 Hello everyone! Today we are going back to basics. I previously started a theme based on reviews from older albums. Today’s feature is the classic and legendary album from Usher titled ‘Confessions’. I will be referring to the original released version of the album. The album which was released in 2004 and was the fourth studio album by US singer Usher and is possibly one of his most celebrated pieces of work. Timeless music is when regardless of its release date, anytime you listen to it, feels like it’s the first time. This album ticks those boxes. For me this album is my favourite album of all time. It’s an album that I can recite lyrics from every song, an album with a story, an album with everything I love about music. Most importantly, this album provides nostalgic feelings for me that provide me with elements of joy.

As we are all aware I’m sure, the album takes the theme of a series of confessions as he explains to us in the intro. The album cover shows Usher in a Confessions booth and throughout the album we are given reasons why Usher is confessing. As I’ve previously stated, music is considered therapy for a lot of people and Usher used this album to reveal some of his darkest and painful secrets making this possibly one of his most personal albums. I remember reading somewhere that while the album is an R&B album, he wanted us to also experience a hip-hop vibe which could be argued to be in ‘Yeah!’.

‘Yeah!’ features Lil Jon and Ludacris (who has my favourite verse on the song). Ludacris’ line “We want a lady in the street but a freak in the bed” is probably one of the most memorable lines in the song aside from the chorus. The three of them also have a great collaborative effort on East Side Boyz “Lovers and Friends” which is a favourite of mine.

The third song on the album is “Throwback“. It’s funny because I had the album for a long time before this song stuck with me. “You never miss a good thing ’til it leaves ya & finally, I realised that I need ya, I want you back”. These lines set precedent for the rest of the song. Usher sings about wanting his woman back after she leaves him for admitting his cheating. The whole song is dedicated to his anguish at the fact she has left him and he misses her. On reflection, he regrets all the bad things he did and said. I love the uses of instruments in this song, it would have been great to have heard this song live back in the day.

‘Confessions Interlude/ Part 1‘ and ‘Confessions Part II’ art possibly the most infamous songs on the album. The interlude is Usher preparing his woman and us, the listener for what is to come. Interludes on R&B albums were popular around this time and I like the added touch of them. After a while the interlude was turned into a full fledged song. Part II is Usher outright confessing about his infidelity and expressing his regret. Usher sings “Just when I thought I said all I could say, my chick on the side said she got one on the way” confirming that he has gotten the other woman pregnant.. The song is apparently not exactly true but is based on Usher’s friends similar experiences. The execution however is flawless and you really believe Usher is living this life. Throughout the song we can hear the stress in Usher’s voice as he sings “Man, I’m throwed and I don’t know what to do, I guess I gotta give part two of my confessions” implying that this is the conclusion to this first version and interlude. There’s a part in the song when Usher hits a high note; “I said one second, baby, please hear me“, at a part where he is trying his best to let his girlfriend hear him out. The high note feels like desperation from his part and Usher incorporates it into the story so well. This song told us a story with Usher being the narrator and main character. The song writing, production and vocal performance in this song will forever make it a classic.

‘Burn’ is another R&B hit from Usher. He sings the ballad with such passion. The video for this song is legendary and I can’t think of the song without seeing Usher with trees burning beside him. Verse 2 is my favourite part of the song. The song is based on the conflicting feelings of a breakup. He sings “Cause the feeling ain’t the same, find myself calling her your name“, One one side he is trying to move on but he keeps being reminded. The other feeling is feeling regretful as he sings ” What I gotta do now to get my shorty back? Oh oh oh oh”. The song is one of the best R&B vocal performances on the album and definitely a fan favourite.

‘Caught Up‘ is a more upbeat Usher song as he sings about catching feelings for a woman. The song is Usher singing his confusion as to how the woman “has a hold on him”. My favourite line is when he sings “Her body was so tight, I’m looking for her in the daytime with a flashlight“. What a funny analogy. While the song takes a more upbeat mood, the production does too, there are more uses of drums and brass instruments.

‘Superstar Interlude’ and ‘Superstar‘ are possibly my personal favourite songs on the album. He sings “I won’t stop until I see you sugar”, on the interlude to again prepare us for what is to come on the main song. On ‘Superstar‘ he sings about a woman who he idolises and puts on a pedastool. He has no shame expressing his love; “I’ll be your groupie baby
‘Cause you are my superstar, I’m your number one fan, give me your autograph, Sign it right here on my heart“. The irony of this song is that Usher himself is the Superstar and is used to having fans and groupies who are usually in awe of him however he has found a woman he is in awe of. He uses the metaphors of being a fan he claims to “show you just how I adore you“. He hits the high notes in this song with ease I love how he flips the script throughout to show us his vulnerable side. “Girl you’re one of a kind cos they don’t make em like you anymore”….a beautiful ode.

‘Truth Hurts‘ is another underrated song on the album. The song can be considered karma based on the topic of the beginning of the album. In this song Usher sings about how the woman in the relationship has ruined the relationship due to her “infidelity; “Baby, everything we built on trust, you’re tearing it down“. The irony is that we find out that all of these “fears” are really a projection of how Usher really feels. He confesses he’s only been accusing his girl of cheating due to his guilty conscience. Usher sings “I’ve been blaming you when I’m the one that’s doing wrong” once again admitting he’s the one who’s been unfaithful.

‘Simple Things’ is another one of my personal favourites. I feel this is the song with the most important message from the whole album. It can relate to relationships, love, jobs, family and pretty much life in general. In the song Usher advises us that it’s really the simple things in life we always underestimate. Those are the things that are the most important. The song has incredible advice from the beginning; “Just copped your girl a brand new Rolex but you can never find the time to spend at home“. He proceeds to sing my favourite line; “But you don’t know you’re chasing a dime, losing a treasure” telling us to appreciate what we have already. He advises men to understand that splashing the cash on your woman is great but what is more important to her is you, not the materialistic things. “You hear her talking but don’t hear what she said“, sometimes we hear what we want to hear rather than what the person is trying to say. Usher ends the song by stating “Man, I tell you, cars, clothes, and fancy things don’t mean a damn thing” advising men to give them things money can’t buy, their time, love, appreciation and affection.

‘That’s What it’s Made For’, ‘Can U Handle It?’ and ‘Do it to Me’ are all songs that could be considered slow jams. These songs are classic Usher, stripped back, pure vocals. It can be argued that all songs have the same theme; sex. ‘That’s What it’s Made For’ is Usher singing about his manhood and the use of it, to pleasure women. The song explores how him and a woman are partaking in consensual sexual activity. ‘Can U Handle It?’ is Usher seducing and teasing a woman. ‘Do it to Me’ is another one of my favourites from the album. I don’t think it’s possible to hear this song without feeling the need to move. I like the production on this song. The big Base and what feels like a large bang(drums?) played throughout adds to the intensity. Usher hits the high notes effortlessly as usual and one of my favourite lines; “Squeezing, holding, biting, scratching, spanking, screaming, pulling my hair when you need me” with his high vocals is just 😍. Yeah this song is the one! Whew!‘Follow Me’ is Usher being real. In this song he sings about the fact he’s finally found a woman he can be himself with. “Sometimes I gotta smile (smile) when I don’t feel like smiling”, his lifestyle is tiring but he doesn’t need to pretend with the woman

What an album. I won’t lie, I don’t think since this release there has been an album that has provided me with so much joy and love. Hopefully real R&B can be born again because it will be a shame.