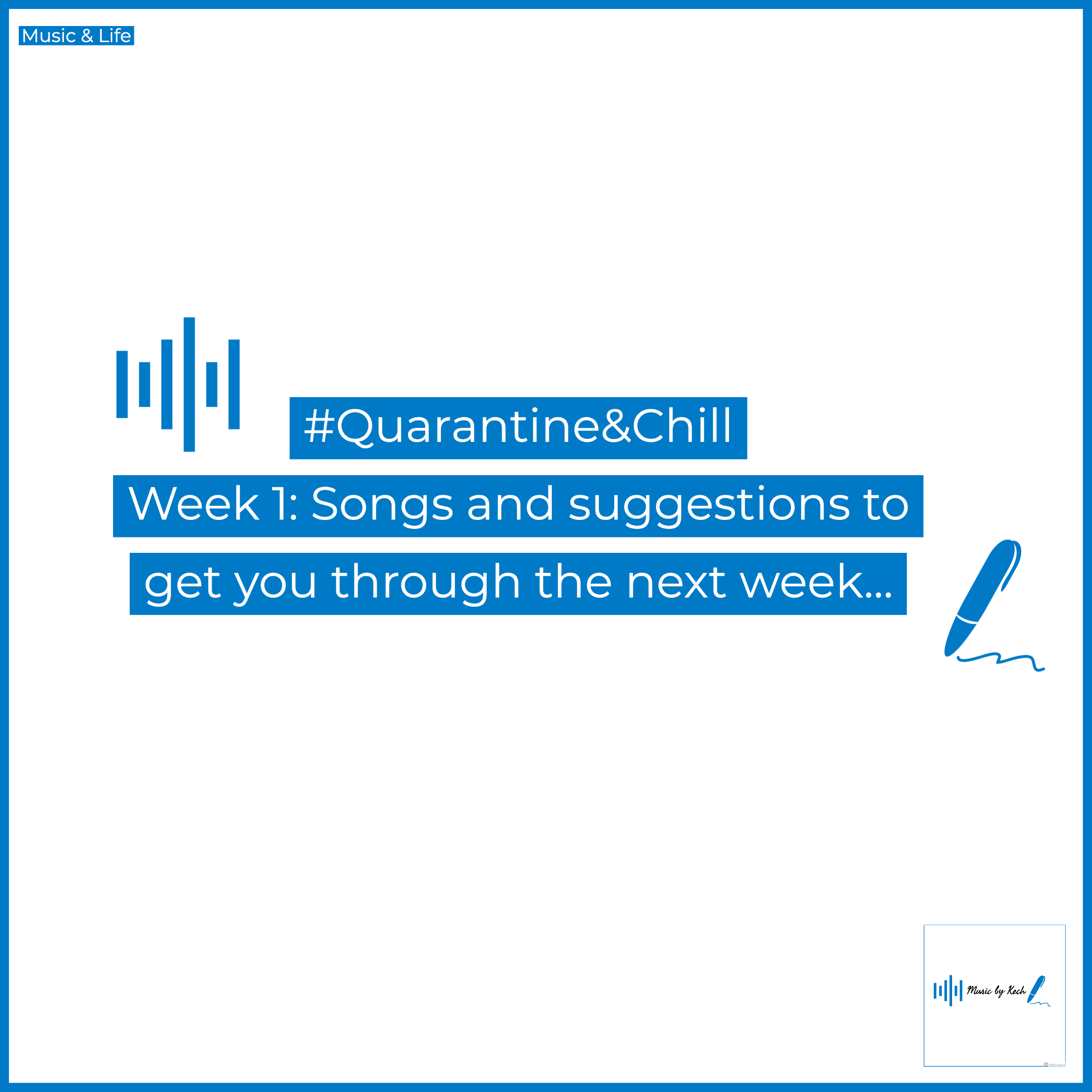 What a week it’s been, here in the UK!! On the 23rd of March 2020, the UK prime minister Boris Johnson announced a lockdown for the whole of the UK as a result of the ongoing outbreak of the Coronavirus Covid-19. This lockdown meant that unless you were a key worker, you had to remain indoors and only leave for exercise once a day or to buy essentials. All of this of course is to help the nation fight against the worldwide pandemic happening.

If like me, you suffer from anxiety, a big change like this could be detrimental to your mental health. I’ve always expressed how music for me is my way of sometimes being able to disconnect from the madness of the world but also to comfort me in times of need. I’m going to try and provide weekly lists of songs I’ve been listening to throughout the week and also provide you with some tips that may help us all through this challenging time. The most important thing I’ve learnt and had to accept from this situation is that it is out of anyones control however there is some light at the end of this. As long as everyone continues doing the part (staying at home and social distancing), we will get through this. Here are some songs I’ve listened to this past week, old and new! I’ve also created a playlist for those working from home to listen to, music that you an have on in the background without getting distracted! I’ll put the link below! Have a nice week everybody and remember we are one week closer to this being over…

I’m a big big fan of Lotto Boyzz and am so glad they are back with some new music. if you aren’t familiar with their music, listen to their previous EP “Afrobbean”. With this first comeback single, they recruit rapper Dappy who fits the tone of the song perfectly. Lotto Ash’s voice is sensational on this track and it’s nice to hear Lotto Lucas back to his best. Dappy showcased his talent to spit some very catchy metaphors. This is a nice song to chill and vibe to especially during the downtime we are all having now. It will have you singing that you could “Never be a plus four, four”!

John Legend hosted a small concert from his home and broadcasted live on his instagram last weekend. During this live, he debuted his new single ‘Actions’. Fast forward and the song is officially out!! You will most likely recognise the sample John has used from Dr Dre’s 2000 classic song “The Next Episode” which of course is still a sample from “The Edge”, a song by David McCallum. This version is a nice flip from the song we are used to and it surprisingly works really well with it. This song is one of the first to be released from John Legend’s upcoming album. Have a listen below:

This is one of the songs on Jadakiss’ recent album ‘Ignatius’ that he released March 6th. I’m an old school Jadakiss fan and although I haven’t taken in the album properly, this song was one of the ones that stood out for me. Ty Dolla provides the vocals as beautifully as he usually does. Have a listen below:

This trio have just released their new album ‘Insomnia‘. If I am honest, from the first few listens, this is the only song that caught my attention. I am not really a fan of Young Adz’ sound but Chip was the star on this song! We haven’t heard from Chip in a while so it’s nice to hear him going in on a song again. I also like Skepta on this track but I think he was stronger on the song “Golden Brown“. Have a listen to “Waze” to hear Chip in his glory. Have a listen below:

PND has just released a new album and although I haven’t taken it in properly, I am so glad to finally hear Rihanna on a track! Would have been nice to have heard her sing more solo on this song but nevertheless her harmonies with PND and her vocals on the chorus were nice to hear. I also would have loved for it to have been a bit longer but it’s a catchy song and nice song to vibe to. Have a listen below:

This was not a collaboration I would ever have expected haha! I always like when UK artists bring American artists to feature with them. I feel when it is this way round UK artists very rarely compromise their sound. The UK stands out more and it’s more the US artists keeping up with us. I love Tion Wayne on this song and I think he was very fitting. 6Lack provides the perfect vocals too. Have a listen below;

Young Y & Bugsey are back with an EP called “Plead the Fifth” and this was one of my favourite songs on there. The JAE5 produced song is a nice insight into how the duo can switch their flow. I like this side from them and of course the production is great on this song. I also like the subtle homage to Ma$e’s song ‘What You Want’ with the final verse. Check it out:

Here is my Quarantine Playlist: